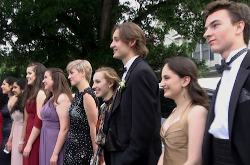 
Hope Nibert has a huge smile on her face.

The 18-year-old from Arlington, Virginia has a lot of reasons to be happy. Her high school graduation is just days away. She goes to Guatemala in the summer to work there with her church. Then, in the fall, she will head to Elizabethtown College in Pennsylvania.

But that is not why she is smiling right now. Tonight, in a beautiful long dress, with her hair perfectly curled, she is excited to be going to prom.

“A prom is a formal dance for high school students that’s usually at the end of the year.”

Prom was born in the United States more than 100 years ago and has spread to other parts of the world. In America, it has become an industry similar to the wedding business.

A study done by the American financial company, Visa, found that, on average, an American family spends more than 900 dollars on prom.

Much of it is spent on what the young adults wear to the formal dance. Gowns often cost in the hundreds of dollars. Tuxedo rentals are similarly priced. And then there are costs linked to hair and makeup, flowers for prom dates, dinner and transportation.

It adds up. But some students find ways to make the event more economical.

“I borrowed my dress,” says Maggie Kinnett. Like Hope, Maggie is a senior at Yorktown High School in Arlington. She got her makeup done without cost by a professional who is a family friend.

Hope also cut costs. She bought her dress online for far less than she would have paid in the stores. She also did her own hair.

Many girls choose to get ready for the prom with friends. They might get their hair done at a beauty shop together. They might hire a professional make-up artist for a few hours to share the costs.

Probably the least costly thing about prom is the ticket to the dance. Yorktown held its event at a hotel in Arlington. The tickets were $45.

Maggie and Hope were among 15 friends who spent the evening together. This is a common tradition. The kids will gather at a student’s house. They take pictures, share appetizers and then, often, go to dinner together at a restaurant.

Christine Wanda chose that approach. She is a senior at H-B Woodlawn Secondary Program in Arlington.

Christine was in a group of about twenty students. But the crowd at the house where they met was larger. Several parents had also gathered to see their children off.

Joyce Wanda was among them. She moved to the U.S. from Uganda 21 years ago.

“I grew up in Uganda, I went to school in Uganda. We didn’t really have prom… So, when I arrived here, obviously the idea of prom is really new. It’s a new concept. The kids really kind of like, take it that serious(ly).”

But Wanda says her daughter told her she did not want to spend a lot of money. Nor did she want a date.

“I thought well don't you want to have a date. She’s like, 'Well, I don’t think it’s really that necessary. You can still go to a prom with your friends, and you'll enjoy yourself even without a prom date.'”

But, according to Hope Nibert it might matter more to students at Yorktown.

“There’s a lot of pressure to have a date to prom, just because people don’t want to be by themselves and be seen by themselves. It’s really to me, not a big deal, but it’s definitely a big deal at my school.”

Asking someone to prom, however, is no small task in the United States. “Promposals,” as they are called, are supposed to be imaginative and take time to plan. Sometimes a kid will make a big poster using rhymes or word play to invite someone to prom.

Some kids might buy a gift to present when they ask someone to prom.

But some promposals can be far more elaborate and sometimes not a good idea. In a California park, for example, a student sprayed “Prom?” in huge letters on a boulder last year.

In May, many people were offended when a white high school student in California painted his face black to ask a girl to prom.

But most promposals are simple and sweet. And sometimes getting the “yes” response is the best part of prom.

That seemed to be Kevin Nunez’ experience. The H-B Woodlawn student came to the U.S. from El Salvador in 2015.

“This is my first prom. That is not a tradition in my country...and to be honest, I am having fun. The most special thing is that I asked my girl to come with me so that (makes) the evening more special.”

H-B Woodlawn’s prom was held at the Washington Golf and Country Club in Arlington. The kids had access to several large rooms, a photo booth and a beautiful patio with a view of the National Cathedral in Washington. The night was warm and clear, the atmosphere elegant and romantic.

But, most of the time, the students were inside, tearing up the dance floor, loudly celebrating each other and the start of their adult lives.