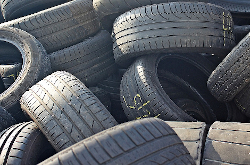 Not long ago, Nabipur was a quiet farming village in northern India. Now the village is home to several large furnaces. They burn old tires from Western countries. The air is sometimes thick with smoke and the soil black with soot.

By burning tires, the furnaces produce a low-quality oil in a process known as pyrolysis.

Six years ago, there were no pyrolysis production centers in the village, about 110 kilometers south of New Delhi. Now Nabipur has at least 10 plants, with most operating at night to avoid inspection, some locals say.

“Used tires are not available locally, so they import from abroad,” said Shiva Choudhary, a businessman in Nabipur. “They clean their own country and dump their garbage on us.”

At one, workers wore no safety equipment. Black soot covered their skin and clothes. The owner, Pankaj, said a trader sells him tires imported from overseas.

Villagers said they have suffered from breathing problems and eye and throat infections since the plants began expanding. Farmers say they have found black dust in their soil.

The Reuters news agency could not independently confirm the claims. It was also not possible to verify if the operations had a government permit to operate.

International trade in waste tires has almost doubled over the past five years, mainly to developing countries like India and Malaysia. This information comes from customs records provided to the United Nations.

Britain is currently the largest tire exporter, followed by Italy and the United States. India, responsible for 32% of all imports worldwide last year, is by far the biggest buyer.

The Basel Convention is an international agreement that governs trade in dangerous waste. The convention does not define tires as hazardous, meaning there are few restrictions on trading them.

In many countries, such as the United States, most old tires are placed in landfills, recycled or used as fuel in factories.

Pyrolysis supporters say the process can be a relatively clean way of disposing of tires and turning them into useful fuel. However, controlling pollution and processing waste can be costly and difficult to make profitable on a mass scale.

State-of-the-art plants can cost tens of millions of dollars. However, basic Chinese-made pyrolysis equipment can be purchased online for as little as $30,000.

At one plant Reuters visited in Malaysia, Bangladeshi immigrants covered in dust put imported tires into a Chinese-made furnace. They live in a small shelter next to the furnaces.

“People don’t know where old tires go,” said the owner, who gave his name only as Sam. “But if my factory doesn’t exist, where will the tires go?” He said he had a permit to operate. However, Reuters could not verify this information.