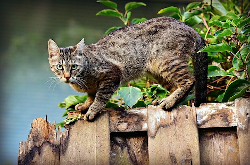 People around the world love their pets. And in the United States, cats are very popular. But they are not just popular as pets. Their often strange and funny behavior has made them really popular on the Internet too.

So, it is not surprising that American English has many cat expressions. In past programs, we have talked about several of them. But today we focus on one expression that features another animal -- birds.

Some cats like to catch and kill small birds. Birds such as sparrows, finches, robins and canaries are fair targets for these skilled hunters. Today’s program centers on the canary.

With its beautiful feathers and lovely bird-song, many people keep canaries as pets, too. So, if a cat eats one, it may have a look on its face that shows both pride and guilt. The cat is happy it did it even if it is wrong to eat a fellow pet.

Now, do cats feel guilt and pride? Probably not. But people do.

Now let's say I look very proud but slightly guilty for doing something I should not have done, others can say that I look like the cat that ate the canary. You can also say “swallowed” instead of “ate.” Both work.

This look is not one of honest pride for hard work or a great achievement. If looks could talk, this one would say, “I just got away with something and you have no idea what it is. I should not have done it and I know it was wrong. But I am still pleased with myself!”

That’s right. The expression “to look like the cat that ate the canary” says all of that.

When using this expression, don’t forget the guilt part. Let’s say you have a friend who studied really hard on a test and then scored really well. She feels proud of her accomplishment. Her smiling face shows it.

But you would not say to her, “Well, don’t you look like the cat who ate the canary. Congratulations!” The expression does not work that way.

However, if she did not study but still passed because she cheated and still looks proud about it … then the expression will work quite well.

Now, we use this expression in other situations. Maybe we know something that no one else does and it shows on our face. We have a secret. We may look like the cat that swallowed the canary.

We also use it when we are really pleased with ourselves -- when we feel smug. What does “smug” mean, you might ask.

When you are smug, you are TOO proud of yourself -- to the point where other people are upset or annoyed with you. You are too self-satisfied.

People who look like the cat that ate the canary are also hiding something from others or simply not telling all the details. One word for that is being coy.