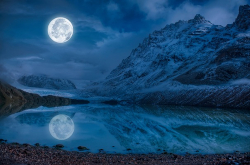 Today we are talking about a lunar phenomenon -- a moon event. It’s called a blue moon.

Experts at the U.S. National Aeronautics and Space Administration (NASA) explain this lunar event. They say a blue moon is the "extra” moon in a season with four full moons.

The NASA website says that “since the 1940s, the term ‘blue moon’ has also been used for the second full moon in a calendar month.” This usually happens only every two-and-a-half years.

The NASA experts explain that a blue moon is not actually blue in color. In fact, it looks the same as a regular monthly full moon.

What makes a blue moon different is that it does not appear in the sky that often. And this is how we use it as an English expression.

A “blue moon” is a long or seemingly long period of time.

For example, I usually keep busy. So when I’m not working, I like to sing songs, write stories or read books. But sometimes, I just like to do nothing. So, once in a blue moon, you’ll find me on the couch, watching movies and eating popcorn.

Here’s another example. Let’s say you have a friend who you do not see very much anymore. You can say you see him once in a blue moon.

It feels like an eternity since you have talked. It’s like he has dropped off the face of the Earth! You can also say it has been forever since you have seen him.

And finally, here is our last example. If you have been busy, you may not have had time to practice your English. But just remember, if you only practice once in a blue moon, your English may not improve very quickly.