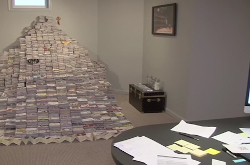 
Some people collect postage stamps -- the small pieces of paper you place on letters or postcards before mailing them. Other people collect works of art, antiques or musical instruments. But a man in the American state of Maryland collects…secrets.

For the past 10 years, people from throughout the world have been sending Frank Warren postcards and other objects with secrets written on them. He now has a million secrets. “It’s a drawing of an elevator. And the secret says: ‘I feel guilty when I take elevators for one floor, so I limp when I get out.’”

Mr. Warren lives in Germantown, Maryland, near Washington, D.C. Ten years ago, he created an art project he calls “PostSecret.” “I invited strangers from all around the world to write down their deepest confession on a postcard, something they’d never told anyone else before, but something that was true. And I asked them to mail it to my home anonymously.”

People send him postcards, other objects and emails telling their secrets. Every Sunday, he chooses 10 secrets and puts them on the PostSecret website, postsecret.com. “The way I choose to see it is someone is finally finding the strength and courage to make their heart vulnerable.”

Mr. Warren says he created PostSecret so people would have a safe place in which to share their secrets. “I was struggling with secrets in my own life. And it was by creating this safe place where others could share their secrets with me without judgment -- anonymously -- I think that space was something I needed just as much as they did.”

He has published six books full of the secrets people have shared with him. One secret in each book is his.

Eric Perry delivers mail for the U.S. Postal Service. He has brought thousands of secrets to Mr. Warren’s home over the past three years. “I have a couple of the books that Frank’s given me and I’ve read 'em all and my family’s looked at em all and it’s, it’s wild!”

The project itself was once one of Mr. Warren’s secrets. His wife Jan did not know exactly what he was doing until the first book was published.

Some people tell Frank Warren of their secret desire to kill themselves. So he and the PostSecret community have raised more than $1 million to help prevent suicides.