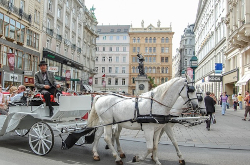 
The Austrian capital, Vienna, is known for its museums, palaces and ease of living. The city of 2 million people was recently identified as having the world's highest quality of life for the tenth year in a row. That opinion comes from Mercer, a consulting agency that does a yearly Quality of Living Ranking.

Measuring quality of life is not a simple job. In a statement, Mercer said the agency looks at many factors. For example, researchers measure how easily people can use public transport, such as buses and trains. They ask whether drivers can move well on the roads.

They ask if houses and apartments are available at a good price, and whether children can go to international schools. They think about whether people in the city can enjoy music, theater, restaurants and sports. And, they look for a healthy political and social climate.

In total, the agency considered 39 factors in 10 areas to name Vienna the winner. Vienna has also been ranked number one on other quality of life measurements, such as the Economist's Global Liveability Index.

The 10 cities at the bottom of Mercer’s list did not change from the previous year. Baghdad ranked last, followed by Bangui in the Central African Republic and Sanaa, Yemen's capital.

American cities did not do very well on quality of life rankings this year.

"All US cities covered in the analysis fell in the rankings this year, with Washington DC (53) the biggest faller," noted Mercer's statement.