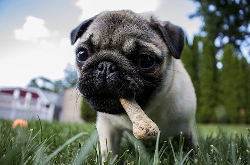 There are many times in life when we have disagreements or problems with other people. Maybe someone does something or says something that upsets us. But, it is best not to let these issues fester.

When a cut or wound festers, it becomes infected and painful. And, “fester” is also used to describe a problem that gets worse.

If you stew over an unresolved problem, or let it fester, it can become a big issue. You might call it a bone of contention.

This phrase comes from the 16th-century. Imagine, if you will, two dogs fighting over a bone. The “bone” is the contentious issue that two people fight over. “Contentious” describes something that is likely to cause people to argue or disagree.

For example, the world of politics has far too many contentious issues to name. If I tried, we would be here all day!

Okay so, unresolved issues often only get worse. Talking about them can help. But how do you raise the issue? Well, you could say to the person, “I have something upsetting to discuss with you and it is something that you did and I need to resolve it.”

But that is quite long. Thankfully, we do have an expression that means the same thing but has fewer words and is more interesting. Instead, you can simply say, “I have a bone to pick with you.”

As with “bone of contention,” this phrase also comes from dogs during the 16th century. This time the dogs are struggling to pick the meat off of a bone.

If you use this expression, the other person will understand that a) you have a problem on your mind that you want to talk about and b) they did something to cause that problem.

We use this expression with our friends and family. It is a little informal but we can also use it at work. Now, let’s hear two friends use these expressions:

So, is Steve coming to the party tonight?
Probably.
Good.

Why? And why do you have that look on your face?
What look?
Your angry look.

If you must know -- I have a bone to pick with him.
Not again. What is it now?
Well, I’d rather talk to Steve about it first.

Look, you can take care of your bone of contention with Steve some other time. I don’t want you two yelling at each other at my party.
What makes you think we’re going to yell?

Because the last time you had a bone to pick with him, it ended in a yelling match.
Oh, right. Well, this time it won’t come to that. I promise. We’ll talk in the kitchen. It’ll be more private.

No, not the kitchen! Take up your issue with him in the … garage. It’s more private and there are fewer things for you to break.
Agreed.