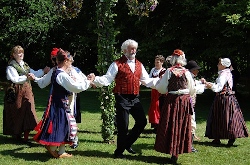 Today, we talk about two activities that many people find really fun and one that makes them happy -- singing and dancing!

So, why is the expression “same old song and dance” not at all related to fun or happiness? That is the question we will answer today.

One online reference guide claims that Americans first began using this expression in the late 1800s.

Around that time, vaudeville was a popular form of show business in the United States. In a vaudeville show, performers sang, danced and acted in short, funny skits. Some shows even had animal acts.

And that is where we get the expression “same old song and dance.” Americans use this term in different situations and in each one, there is a slight change in meaning.

Here are some ways we use this expression. Sometimes “the same old song and dance” can be an overused, weak excuse. It is something we say to others to explain bad behavior. But people have heard it so often that they do not believe it, nor do they care.

Listen for this expression in the following example involving two people in a work-place environment.

Janet: Hey, Matt. Where are you going in such a hurry?
Matt: Hi, Janet. I have to drop off forms to a client before the close of business today.

Janet: Why are you taking them yourself? I thought you asked James to take care of things like that.
Matt: I did. But he had to take his dog to the animal hospital.

Janet: Didn’t he give you the same song and dance last week?
Matt: No, last week he missed work because he had a doctor’s appointment … again.
Janet: He has a different excuse every week!

Now, sometimes the “same old song and dance” is used to mean someone is trying to trick you. Or, at least, they are only telling you part of the whole story.

For example, at every meeting, a business owner gives her employees the same old song and dance about the company's great plans for the future. But then … nothing happens.

Sometimes the same old song and dance does not mean an excuse or a trick. Sometimes it is just a very long and complex story. Used this way, the speaker wants to justify something. They want to convince the listener that their idea is a good one. But in this case, the listener does not really want or need to hear it.

Listen now to how the term “song and dance” is used to mean a very long, complex explanation.

A: How was the theater last night?
B: It was wonderful, and the performance was great. But it just took way too long for the show to start.

A: Why is that?
B: Well, before the show, the theater owner made a very long speech about the importance of theater. He’s raising money for a theater program for at-risk youth.
A: Well, that's not a bad thing, right?

At other times, “the same old song and dance” can mean a complex system which involves many steps, like a ritual or ceremony.

For example, let's say your friend works for a terrible boss. Every time your friend wants to start a new project, he is required to explain the same steps over and over again. Let’s hear how he uses this expression.

A: Want to go out for a bite to eat?
B: Sorry. I don’t have time today. I have to prepare my project proposal.
A: What does that involve?

B: I have to write a report listing my goals. I have to prepare a cost analysis presentation on why it is a worthwhile project. Then I have to prove that no one else in the company is doing it. THEN I have to get statements from co-workers who think it’s a good idea.

A: Oh, no. That’s sounds awful.
B: And every time I present an idea to the boss, it’s the same old song and dance. I’m sick of it!