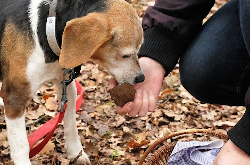 Rising temperatures are worrying truffle hunters in northwestern Italy. In and around the town of Alba, the most prized truffle -- a white one -- can sell for two times the price of gold.

Last month was unusually warm in Alba. During October, eight out of 10 white truffles recovered by Carlo Olivero and his 3-year-old dog Steel were dark and dried out.

“They are clearly signs of the temperatures,’’ Olivero told The Associated Press as he held one of the truffles in his hand. He put the others back in the ground so that its spores will spread. He hopes this will lead to more truffles next year.

For food lovers, truffles are a tasty, and costly treat. Truffles look like potatoes, but are actually a kind of strong-smelling fungus that grows underground. They are usually found with the aid of trained dogs or pigs.

Alba is in Italy’s Piedmont region, an area known as the “white truffle capital of the world” for truffle lovers. Each year the town holds a truffle celebration and an auction to raise money for worthy causes. This year, a Hong Kong buyer paid 120,000 euros -- more than twice the price of gold -- for a single truffle.

The longer-term effect of rising temperatures on the highly prized white truffles is being carefully watched. Truffles grow best in cool, rainy weather. Climate change has pushed back high truffle season to November.

“It has been a few years that we have been worrying about truffles,” said Antonio Degiacomi. He is president of Italy’s national center for truffle studies.

“We have had over the last three seasons one terrible year, one excellent season and one that is decent,” he added.

Olivero noted that a maker of the area’s famous Barolo red wine wanted to cut down two large oak trees where truffles grew to stop them from blocking sunlight.

“I told him, ‘The day you take all the oaks, only you will drink your wine,’” Olivero said. He added that the truffle and wine go together in every meal, but they also need to grow together in nature.

Unlike the more common black truffle, white truffles only grow wild, so controlling their environment is important.

Italy has begun paying 24 euros a year to property owners to keep trees they might want to remove. Truffle groups have made deals with landowners to keep their wooded land cleared in a way that helps truffles grow.

After an unusually hot and long summer, the recent wet weather has been perfect for truffle hunting around Alba.

“In these days, the quality is especially high,’’ said truffle judge Stefano Cometti.

Even after more than 40 years of hunting truffles, Olivero still gets emotional when Steel, his dog, smells one in the soil.

Steel’s nose is perfect. The dog recognizes the sweet smell of a white truffle and begins quickly digging in the earth to find it.

“I call it the magic moment, because it means that there is something under there that we are looking for,’’ Olivero said.