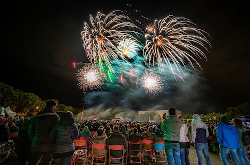 That is a song millions of Americans will hear this New Year’s Eve. It is called “Auld Lang Syne.” It is the traditional music played during the New Year’s celebration.

Scottish singer-songwriter Douglas MacLean opened our show, with his version of the song.

"We twa hae ran about the braes,
And pou'd the gowans fine..."

Auld Lang Syne is an old Scottish poem. It tells about the need to remember old friends. The words “auld lang syne” mean “old long since.”

No one knows who wrote the poem first. However, a version by Scottish poet Robert Burns was published in 1796. The words and music we know today first appeared in a songbook three years later.

This song is sung in the United States mainly on New Year’s Eve.
Here is another version by the Scottish group The Cast.

I would like to wish all of our listening friends a very Happy New Year!