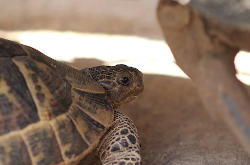 English expressions come from a number of different places and some are quite old. Perhaps one of the oldest expressions is “slow and steady wins the race.” It comes from a collection of stories known as Aesop’s Fables. Aesop is thought to have lived over 2,000 years ago in ancient Greece.

“Slow and steady wins the race” means that if you set a goal for yourself and keep working toward it, you will reach that goal. However, to accomplish that goal you mustn't waste time on mindless or meaningless things. You must not lose focus.

And that brings us to one of Aesop’s fables called “The Tortoise and the Hare.”

As you probably know, a hare looks like a large rabbit. It has long ears and runs very fast, much faster than any tortoise. That cannot be debated.

As in many fables, the animals are given human personality traits. The hare has a loud, bragging personality and seems overconfident. Tortoise is focused. In “The Tortoise and The Hare” these two animals race each other!

But now that we know they also have human personalities, what will happen? Let’s find out. Here is the Learning English version of “The Tortoise and the Hare.”

NARRATOR: One day, Tortoise was walking through the woods. She had business to take care of. So, she walked through the forest with her usual determination. When Tortoise passed by Hare, he was standing against a fence post. She simply nodded her head and walked on … very slowly.

HARE: Hey, Tortoise. Where are you going?
TORTOISE: I have some important business to take care of.

NARRATOR: Hare found this very funny. He did not want to waste the chance to make fun of Tortoise for being so slow.

HARE: If it’s so important -- why don’t you hurry? You’ll never get anything done walking like that.

TORTOISE: Like what?
HARE: Slowly, you fool!
NARRATOR: Tortoise lifted her head slowly and answered.

TORTOISE: I will take care of my business and I will get it done sooner than you think.
HARE: Yeah, I doubt that! Look at your slow feet! They are no match for my fast feet. Watch me run!

NARRATOR: Hare ran around and around in circles. He was indeed very fast.
HARE: See? I told you I was fast.

TORTOISE: Yes, you are very fast. And you are very confident in your speed. I have an idea -- why don’t we run a race?
HARE: A race? Between me … and you? Ha ha ha!

NARRATOR: The idea of running a race with Tortoise was so funny to Hare that he laughed and laughed. But finally, he agreed. He wanted to embarrass Tortoise for even having the nerve to challenge him.

HARE: You have some nerve challenging me. Sure! I’ll race you!
TORTOISE: Great. We will meet back here tomorrow at this time. Don’t be late …

NARRATOR: Now, Fox was standing nearby and heard everything. She agreed to be the judge. So, the next day, Fox marked the distance for the race and started the runners off with her famous whistle. (Fox was well known among all the woodland creatures for having the best whistle.)

FOX: Tortoise! Hare! You will start the race on my whistle. On your mark! Get set!

NARRATOR: And off they went! After only a short time, Hare was very far in front of Tortoise. Now, Hare, being a petty animal, did not just want to win. He wanted the Tortoise to feel foolish. So, he started running backwards and yelled insults at her.

HARE: You are so far behind me! You look really small! How does it feel to be a loser!
NARRATOR: Then Hare ran even further ahead of Tortoise. As he ran, he said to himself:

HARE: How dare that Tortoise think she can beat me? I am one of the fastest animals in these woods. You know, I’m not just going to beat her. I’m going to teach her a lesson.

NARRATOR: So, he stopped. He was going to wait until Tortoise caught up with him. And then tease her some more. Hare said:

HARE: I’ll just stay here under this tree and rest a bit. I’m so fast that I’ll be able to beat Tortoise and take a nap!

NARRATOR: Tortoise just kept going -- slowly but steadily. She said to herself:
TORTOISE: I am just going to keep my eyes on the prize. Slow and steady. Onward I go!

NARRATOR: After some time passed, Tortoise came to where Hare was sleeping.
HARE: (snoring)

NARRATOR: Hare slept on peacefully as Tortoise passed by him quietly. When Hare finally awoke, Tortoise was near the finish line. Seeing his mistake, he now ran as fast as he could! But he could not catch her in time and Tortoise won the race!

Also, if you waste your time bragging and showing off -- as the Hare did -- you might not reach your goals.