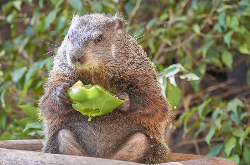 Today’s expression comes from the world of animals! The expression is “eager beaver.”

By definition, an eager beaver is a person who seems full of energy and a good attitude. These people are willing to do what others expect and often do things as quickly as they can. And they are enthusiastic!

A great word that means the same thing (a synonym) is go-getter. A person who is a real go-getter gets the job done!

For an example of how to use the term eager beaver, try to imagine a mathematics class. The teacher tells students that they must solve 100 math problems before coming to school the next day. Most of the students are unhappy about having so much homework! But not all.

A few students do not mind the work at all. They are eager beavers. They love to do math problems and cannot wait to get started. In fact, they do more than 100 math problems! Eager beavers often go above and beyond.

Eager beavers can work in any industry. From law to I.T. from medicine to fashion -- these people arrive before anyone else, and are usually the last ones to leave. These men and women work hard because they enjoy their jobs.

Speaking of the word “industry,” makes me think of another synonym: industrious. Eager beavers are nothing if not industrious.

This expression, of course, comes from the name of the hardworking animal the beaver!

Beavers are not just hard-working. They are strange-looking creatures. They are rodents, like mice and rats. But beavers are much larger. Beavers have a large flat tail to help them swim. They also have thick brown fur, or hair, to keep them warm in cold water. And they have front teeth sharp enough to cut down large trees.

Beavers spend a lot of time in the water, building dams to create small lakes or ponds. They work hard to cut down trees, remove branches, and put them together with mud to make dams. That is why we call the beaver nature’s architect. Few other animals work so hard.

Historians say the beaver had an important part to play in the European settlement of North America.

There were many millions of beavers when European settlers first arrived. The settlers put great value on the fur of the beaver. In fact, beaver was the most valuable fur in North America. Beaver skins often were used as money.

People looking for adventure traveled west across the country to search for beaver. In their search, they explored much of the western territories.

Trading posts are the places where trappers exchanged beaver skins for the goods they needed. Some trading posts became villages and later towns and cities. Many of the beaver trappers became guides in these territories as more people moved into them. They led groups of settlers to new homes in the West.

So many beavers were trapped and killed that there was a time when beavers were in danger of disappearing completely. But laws were passed to protect the beaver.

And, like the animal, the expression “eager beaver” is alive and well in the United States!