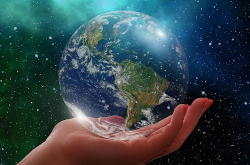 
The Earth is a big place. The U.S. space agency NASA says the Earth has a diameter of about 12,800 kilometers. And the organization Population Reference Bureau estimates that about 7.5 billion people live on our planet. That is a lot of people!

So, it can really come as a surprise when you see someone in a place where you do not expect to see them. This can make the world feel very small.

For example, let’s say I travel all the way to Brazil for a vacation. Then, at my hotel, who do I see? My co-worker from back home -- Caty! I have traveled very far from home only to see someone I know from home! That would be a great time to say: “Caty! Fancy seeing you here! What a small world!”

It is always surprising to run into someone we know in a place as big as … the world! We can say some form of “small world” to show this surprise.

Now, sometimes events and people are connected in a surprising way. In these situations, we can also say “small world.”

For example, let’s say you make a new friend. You two met while playing on the same sports team. You start talking about where your live and what you do. And as the two of you talk more, you both find out that you have the same English teacher!

You can say, “He’s your teacher, too? There are hundreds of English teachers. What are the odds! It is such a small world!”

These are all examples of coincidences. You were not expecting to find these connections between people, places, or events. And sometimes it is not always a pleasant surprise.

Let’s say I go to an art show in New York City. Now, on any given day there are probably many art shows taking place in the Big Apple. But the one I go to just happens to be showing the artwork of my former boyfriend. Really? He’s the artist? Small world.

In a larger explanation, this expression means that although the world seems really big, we can still meet people we know in the most unexpected places.

Usually, we say “it’s a small world” to show surprise at a connection that seems unlikely, improbable, and against the odds.

Generally speaking, “It’s a small world” means that sometimes the world can feel a lot smaller than it is. And that can be a good feeling.

"It's a Small World" is also the name of a water-based boat ride at Walt Disney Company theme parks. And it is the name of the song you hear throughout the boat ride.

There's so much that we share
That it's time we're aware,
It's a small world after all ...

The ride shows children from around the world in traditional costumes. They are dancing, playing, and singing.

On the Disney Parks website, Richard Sherman -- the man who wrote the words to “It’s a Small World” -- talked about the song and what it means.

Sherman said Walt Disney wanted a simple song -- one that could be performed in English and many other languages. He added that people everywhere share the same feelings. So, everyone should respect each other and love each other … after all!