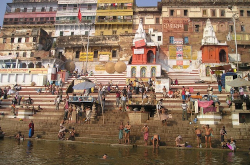 More than 2,000 years ago, a powerful leader built a fortress on India’s holiest river -- the Ganges. King Yayati set up the fort to help guard his territory.

Today, ruins are all that remain of the old structure. The area along the Ganges River is now an industrial city called Kanpur. Workers there collect stones from the ruins to build simple homes. These shelters, called shanties, sit on top of what once was the king’s fortress.

The Ganges stretches over 2,700 kilometers across India. It begins high up in the Himalayan Mountains and eventually empties into the Bay of Bengal.

The Ganges has seen empires rise and fall. It has seen countless wars, kings, British colonial rulers, independence, and the rise of Hindu nationalism as a political movement.

In India, the Ganges is far more than just a river. It is religion, industry, farming, and politics.

To Hindus, the Ganges is known as “Ganga Ma” -- meaning Mother Ganges. It is the center of spiritual life for more than a billion people. Every year, millions of Hindu pilgrims visit temples and other holy places along the Ganges. The word “pilgrimage” means traveling to a special place for an important, often religious, reason.

The river is a source of water for millions of people. To drink from the Ganges is to bring luck. For many Hindus, life is considered incomplete if they do not bathe in the river at least once in their lifetime. Its waters are believed to wash away sin.

But all is not well with the Ganges. Pollution has left much of it dangerous to drink. Large amounts of untreated wastewater are being added to the river every day. Another source of pollution comes from water used by manufacturers of cloth and leather products.

Criminal groups illegally remove sand from the riverside. They use it to feed India’s seemingly endless need for concrete, a common building material.

Hydroelectric dams were built along waterways emptying into the Ganges. These dams are needed to supply power to India’s growing economy. But some Hindus are angry. They say the machinery has compromised the purity of the river.

The Ganges starts at the Gangotri Glacier. Its ice provides almost half the river’s water. Over the past 40 years, the ice has been melting at a frightening rate. The glacier is now shrinking about 22 meters every year.

For thousands of years, the glacial ice melt has guaranteed that India’s dry plains get enough water, even during the driest months. The rest comes from smaller waterways that flow down the mountains.

As the Ganges flows across the plains, its once clean water becomes dirty. The mineral-rich water begins collecting waste and pollution from the millions of people who depend on it. Millions of liters of waste products -- along with heavy metals, agricultural chemicals, human bodies, and animal remains -- enter the Ganges every day.

This has made it one of the most polluted rivers in the world. Indian officials have tried to limit the pollution in some places, but large parts remain dangerously unhealthy. Still, to Hindus, the river remains religiously pure.

Every year, tens of thousands of Hindus bring the bodies of their loved ones to be cremated at the Ganges, in the city of Varanasi. A Hindu who dies there or whose remains are destroyed by fire alongside it, is also freed from that cycle of birth and death.

After Varanasi, the Ganges continues eastward through endless farmland as it nears the coast. It eventually splits off into ever-smaller rivers. The biggest of these rivers, the Hooghly, flows south toward the sea.

It passes through Kolkata, the largest city in eastern India. Once known as Calcutta, the city is now home to nearly 15 million people. Finally, the Ganges River empties into the Bay of Bengal.

For the end of this story, however, we travel back up to the Gangotri Glacier. There a Hindu holy man named Mouni Baba makes his home. He spoke with The Associated Press.

“Human existence is like this ice,” he said. “It melts and becomes water and then merges into a stream. The stream goes into a tributary which flows into a river and then it all ends up in an ocean. Some remain pure while others collect dirt along the way. Some help mankind and some become the cause of its devastation.”