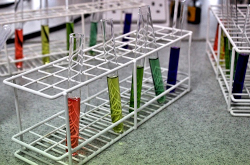 Today we go back to school. We will talk about two terms from science class. Both are tests. But don’t worry. You will not be tested at the end of the program. The first term is “litmus test.” The second is “acid test.”

In science, we use both to determine the chemical make-up of something. In conversation, we use them to determine other things. One identifies where something belongs or whether it is acceptable. The other determines if something is real or good.

But before we tell you which is which, let’s talk about their meanings. First, litmus test.

Now, you may remember doing experiments with litmus paper in a high school science class. Litmus paper is used to identify whether a solution is an acid or a base.

Litmus itself comes from lichen, a small plant that grows on rocks and trees.

Today many English speakers use the term “litmus test” in conversations. To them, it means something you use to judge whether someone or something is acceptable.

Here’s an example. A friend of mine has a single litmus test for dating -- her dog. Her dog must like the man and he must like the dog. After several failed relationships, she found this litmus test to be the one sure indicator of a good fit.

Our second scientific expression is “acid test.” Such a test proves the value, quality, or truth of something.

An acid test can take many forms. It can be an important job or a difficult situation. It shows if someone or something is good enough to succeed.

For example, beating the national champions was the acid test for the basketball team. It showed the team’s players they were better than the champs, even for only one game.

An acid test can also find out whether something is as good as people say it is, whether it works, or whether it is true. For example, a restaurant may look nice. But will people eat the food? Good question! That is the acid test.

An acid test also can test the value of something. For example, I wanted to take an online writing program, but I wasn’t sure if it was the worth the money. Then I found out that 80 percent of the people who took the class got a book deal. That was enough of an acid test for me!

The term acid test also comes from an experiment -- one involving gold. Some people say it dates back to the use of nitric acid to determine the gold content of jewelry.

So, those are the two tests -- litmus and acid. But don’t mix them up. They are different.

But this does not really prove if he is a good choice. So, it is not an acid test. The man never said he would be the perfect partner for her. So, his validity is not being tested. And he might be a perfectly good partner for someone else -- someone who doesn’t like dogs.