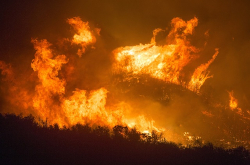 Several large wildfires are burning in California, where extreme heat and dry, windy conditions are fueling the flames.

Two of the three largest fires in state history are burning in the northern San Francisco Bay area. Reports say more than 14,000 firefighters are battling those fires and over 20 others across California.

The fire danger also is high in Southern California, where fires were burning in Los Angeles, San Bernardino and San Diego counties. The U.S. Forest Service closed all eight national forests in the area on Monday and shut down campgrounds around the state.

September and October are traditionally wildfire season in California. A record 809,000 hectares have burned this year. The previous record, set two years ago, included the deadliest wildfire in state history. That fire destroyed most of the community of Paradise and killed 85 people.

Officials have blamed the record-breaking fires on electricity lines along with strong winds and dry conditions. To guard against new wildfires, California’s biggest electricity provider now cuts power to areas with high-risk conditions. In recent days, power was cut to more than 172,000 homes in an effort to prevent new fires.

“The wildfire situation throughout California is dangerous and must be taken seriously,” said Randy Moore, an official with the U.S. Forest Service’s Pacific Southwest Region.

“Existing fires are displaying extreme fire behavior, new fire starts are likely, weather conditions are worsening, and we simply do not have enough resources to fully fight and contain every fire,” he added.

On Saturday, National Guard rescuers in two military helicopters airlifted 214 people to safety after flames trapped them in a wooded camping area near Mammoth Pool Reservoir. The manmade lake is north of the city of Fresno. Twelve people were hospitalized, two of them with serious injuries.

Lynne Tolmachoff is a spokeswoman for the California Department of Forestry and Fire Protection. She told The Associated Press it was “unnerving” to have already reached a record for area burned when September and October are usually the worst months for fires.

Nine hundred wildfires have been reported in California since August 15. Many of them are believed to have been caused by lightning strikes in the middle of August. There have been eight fire deaths and more than 3,300 structures destroyed.

California faced a serious heatwave during the Labor Day holiday weekend. Much of California reached temperatures above 38 degrees Celsius.

Death Valley, a desert area in eastern California, hit a record-high of 51.7 Celsius on Saturday. That number beat the former record of 48 Celsius set in 2017, the National Weather Service said.

Some parts of the U.S. also experienced huge temperature changes in recent days. One of those areas is the western city of Denver, Colorado.

On Monday, Denver reached a temperature of at least 33 degrees Celsius. For Tuesday, state weather officials predicted the low to be well below 0 degrees Celsius, the Denver Post reported. The officials also predicted stormy conditions, including snow.

The big temperature drop could break a state record. The largest one day temperature change in history for Denver was set back in January 1872.