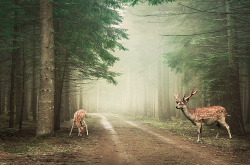 Today we talk about an animal found in many parts of the United States -- deer.

Washington, D.C. is home to many deer. They are sweet-looking, especially the baby fawns with their white spots. In the city, they are fun to watch, but they do cause trouble.

They make a lot of gardeners angry because deer eat almost everything!

In many parts of America, you will see road warning signs about deer. Adults are not little animals. An average male weighs about 135 kilograms! Deer sometimes leap into the path of fast-moving traffic. This can have serious, sometimes deadly, results.

And, that is what brings us to today’s expression -- like a deer caught in headlights.

Deer will often stop suddenly in the middle of a road and stare into the lights of a vehicle coming toward them. They appear frozen in place, or “caught” in the headlights.

When people are in a state of extreme surprise, fear or confusion, we say they are like deer caught in headlights. They seem so frightened that they can not think clearly. They do not know what to do, so they do not do anything.

Sometimes we shorten the phrase and simply say, “like a deer in headlights.”

This is a little different from being called “doe-eyed.” A doe is a grown female deer. People who are doe-eyed are innocent, clueless. They are unaware of what’s going on around them.

Now, please keep this in mind. We usually use “like a deer caught in headlights” in situations that are not life-threatening.

For example, people who have stage fright often look like a deer in headlights. Let’s say I am acting in a play. I know all my lines and feel ready. But on opening night, as I look out into the audience and see all those faces … I freeze.

I forget all my lines and stare into space, unable to speak. Someone watching might say, “What is wrong with Anna? Is she supposed to just stand there doing … nothing? She’s like a deer caught in headlights.”

So the next time you are really surprised or scared, you may find yourself looking frozen and wide-eyed -- like a deer in headlights.