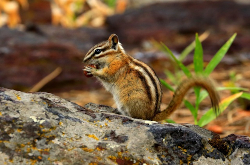 During autumn in many parts of the United States, you can watch squirrels gathering nuts for the winter.

The squirrel puts the nut in its mouth, runs to a place it considers safe, digs a hole, and then drops the food in the ground. Hopefully, the animal will remember where it hid the nut weeks later.

And all the while they do this, they look really funny. But it seems like a wise thing to do. Nuts are a healthy food source. They provide healthy fats and nutrients. That is, if you can break off the shell around the nut. The part of the nut we eat is protected by the shell -- or nutshell.

And that word is the basis for a common saying: in a nutshell.

Now, let’s talk a little more about those shells. They are usually hard to break open. Unless you are a squirrel, you need some sort of tool or device for cracking open the shells. And sometimes this is not very easy.

In American English, the saying a hard nut to crack means something hard to understand. It can also describe an individual whose actions are perplexing. Why did she do that? What is he doing? How are they going to fix that?

You can use this expression for people, problems, or situations that are difficult to understand, solve, or deal with.

When we use the expression, we can say “tough” instead of “hard.” Here the two words mean the same thing: difficult.

The English language has some great words that mean the same thing. Mysteries, riddles, and enigmas are all hard nuts to crack. In 1939, then British Prime Minister Winston Churchill used these words to describe Russian intentions in World War II.

On October 1st, 1939 Winston Churchill gave his first broadcast during the war to the British people. It was during this broadcast that he shared his now famous comments about Russia, which was then part of the Soviet Union. He likened it to “a riddle wrapped in a mystery inside an enigma.” In other words, very difficult to figure out.

“I cannot forecast to you the action of Russia. It is a riddle wrapped in a mystery inside an enigma; but perhaps there is a key. That key is Russian national interest.” (BBC Broadcast, London, October 1, 1939)

These days we also use his expression to describe something very secretive and nearly impossible to know or predict.