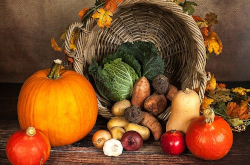 Thanksgiving is a holiday in the United States that involves family, friends, fellowship, and food! So, today we will talk about some English expressions that deal with food and eating.

Let’s start with the star of many Thanksgiving meals -- the turkey! You could say it’s time to “talk turkey!”

When we say that in American English, it means it is time to start talking seriously about a problem and solve it. It does not mean to talk about how dry the cooked turkey is. (Although that is a common Thanksgiving conversation.)

“Talking turkey” is talking direct. For example, let’s say some politicians are having a very long meeting about education. They say a lot without really saying anything important. Finally, one of them says, “Look, we need to start talking turkey about our failing schools in the city. They are not going to fix themselves!”

Now, let’s move on to a popular side dish -- mashed potatoes!

Now, potatoes do not have a strong taste. So, when you make mashed potatoes it is important to add butter and salt.

It is important to butter up those potatoes, but did you know that you can also butter up people?

If I butter up my friends, I tell them lots of wonderful things about them. In other words, I flatter them. I give them lots of compliments.

However, I don’t say these things just to be nice. I want something from them. Back in middle school, I once buttered up my teacher for weeks hoping to get a better grade.

That did not work. It just made him angry. Some people do not like to be flattered or buttered up. The person who you are buttering up might even say, “Don’t try to butter me up. Flattery will get you nowhere.”

Now, let’s add some salt to those mashed potatoes!

But not too much. If you add too much salt, you make a dish unhealthy and it is likely to taste bad. Sometimes just a pinch is all you need. A grain of salt is even less. That is the smallest piece of salt.

If I take something with a pinch of salt, or grain of salt, I do not take it too seriously. For example, one of my friends is known for exaggerating and sometimes lying.

One day, he tells me that he plans to sell all of his belongings, move to New York City and become a poet. I take this information with a grain of salt. I’ve heard these kinds of plans from him before. And they never turn out to be true.

While eating Thanksgiving dinner, you must remember to save room for dessert! The sweet food that comes after dinner is a big part of the celebration.

For some reason pie is more common at Thanksgiving than cake. Pumpkin pie is probably one of the most common in America. But apple, cherry, and pecan pie are often served, too.

In fact, one dinner may have a collection of different pies. So, here is an expression related to pie.

If something is very, very easy to do, it is “easy as pie.”

In fact, I have made many, many pies. So, I could say making pie is -- you guessed it -- easy as pie. You can use this idiom for just about anything that is not too serious.

When I invite people to my home for Thanksgiving, I make LOTS of pie. I want to have enough. This way, everyone gets a slice of the pie.

When you “get a slice of the pie,” it is not always something you can eat. This idiom also means that you get part of the money or profits from a shared deal.

Before we end, there is one more Thanksgiving expression we need to talk about.

Stuffing is a very popular Thanksgiving food. It is a combination of bread, onions, celery or other vegetables and herbs.

Some people stuff the mixture into the turkey and bake the whole thing together. While many people serve it as a side dish, some families have a stuffed turkey for Thanksgiving.

And like a turkey, we can also feel stuffed after finishing a big Thanksgiving meal and eating too much.

“Would you like more turkey? More mashed potatoes?”
“No thanks. I’m stuffed!”