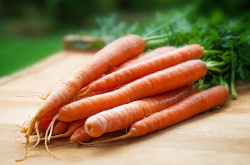 There are many ways to get people to do what you want. You can threaten them with punishment. You can also entice others with a reward. In other words, they will get something in return for some effort or service.

Naturally, you can also just ask nicely. But for now, we will talk about threatening and enticing -- two effective, but different methods of persuasion.

First, let’s talk about these important words. When we persuade someone, we try to make them do something.

We can entice them or offer them something very desirable. We can also make threats or promise harm.

Sometimes we do both. One way of saying this is what we call “the carrot-and-stick approach.” You can say it is a method of persuasion that involves both a reward and punishment.

When given a choice, most people will surely take the carrot, a popular vegetable, instead of the stick, which could hurt.

For example, let’s say a company has a carrot-and-stick approach to vacation days. They entice people to work hard by giving lots of time for paid vacations. (That is the carrot.)

But they also threaten to take away those hours if employees refuse to work hard. (That is the punishment, or stick. When we say “stick” we don’t mean giving a stick. We mean hitting with a stick!)

This kind of system may work well for some workers but not for others. It depends on what motivates you. Do you like your work? In addition to getting paid, what satisfaction do you get from the job? Or are you only working for a paycheck?

When using the carrot-and-stick method, it is also important to carefully consider the reward and punishment. If you do not want the carrot, you are not going to be motivated to do the work. Also, if the punishment is meaningless to you, it will not motivate you either.

Many word historians say the origin of the expression carrot-and-stick approach is unclear. But some say it comes from the custom of urging a donkey to move forward by hanging a carrot in front of it. If it refuses to move, the caretaker might decide to hit the animal with a stick.

Here is another example. The parents tried using a carrot-and-stick approach with their teenage daughter. They promised her a new phone if she brought up her grades and threatened to take away her current phone if her grades dropped even lower.

When it comes to learning English, a carrot-and-stick approach is not a good motivational tool. We can only reward you with praise. And we promise not to punish you…nor would we want to. So, I think the only thing we are giving out here is carrots!