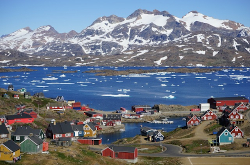 Greenland has become a point of interest for several countries, including the United States and China.

This interest comes at a time when Greenland’s government faces difficult decisions about the island’s future. Those decisions include whether to approve large mining projects.

Greenland has large amounts of resources known as ‘rare earth’ metals. These metals are used to create equipment for electric vehicles, combat aircraft, weapons systems and many kinds of electronics.

Greenland has what the U.S. Geological Survey (USGS) calls the world’s biggest undeveloped deposits of rare earth metals. Deposit is a term that means an amount of a resource, like a mineral, that exists in the ground.

Most of Greenland, the world’s largest island, is north of the Arctic Circle. But the island’s ice covering and glaciers are shrinking. As a result, two Australia-based mining companies are racing for approval to dig. One of the companies is seeking financing in the United States. The other company is owned in part by a Chinese state-supported company.

Each Greenland mine would cost about $500 million to develop, the companies say. Both plan to send mined material away for final processing. This processing often takes place in China.

The two possible mines in Greenland are less than 16 kilometers from each other. They are at the southern end of the island, near a UNESCO World Heritage Site.

The debate over the possible mines has created a political crisis. In April, a general election will be held on the island of 56,000 people.

Many Greenlanders are concerned about pollution. But they believe mining is important for developing their economy. In a 2013 public opinion study, just over half said they want raw materials to become the country’s main source of money.

The country may support either project, both projects, or neither project. But for those Greenlanders open to mining, the two possibilities come down to a choice between one mine that would not produce radioactive material and another that would.

The first mine project would not involve nuclear material. It has won early environmental approval, but it needs investment and a processing plan.

The second project has already spent more than $100 million preparing to mine. It has proven processing technology through its Chinese partner. And it won early political support from Greenland’s government.

But its plans include exporting uranium, a nuclear fuel. It recently ran into strong opposition from residents of the nearby town of Narsaq among others.

Mariane Paviasen is an opposition lawmaker from Narsaq. She said she opposed the mining project because it presents a threat to the environment.

“As indigenous people we have lived in harmony with nature for many, many years,” Paviasen said. “We use these lands to hunt and fish.”

Greenland’s decision comes at a time when some Western countries are considering ways to break free of China in the production of an important resource.

Rare earth metals have many uses, and last year China produced about 90 percent of them, said Toronto-based Adamas Intelligence.

Greenland, a self-governing territory of the Kingdom of Denmark, has a gross domestic product of around $3 billion. Its government wants to gain from foreign investments.

Greenland’s government did not answer Reuters' requests for comment for this story. Last month, the Acting Minister of Resources, Vittus Qujaukitsoq, said that if Greenlanders suddenly decide they do not want the second project, “we’ll make a fool of investors. The credibility of the whole country is at stake.”