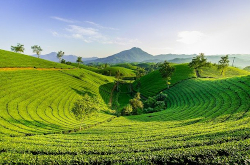 Colors are often connected to the feelings we have. Many expressions in English link colors and emotions. Take for example, the color green.

Green can be a symbol for many things. In other words, it can represent many different ideas, qualities, or objects in our lives.

One of these is money. For example, a greenback is a common expression for a dollar bill…because it is green.

Here is another example: green represents environmental causes. So, if a company goes green, they probably have changed to cleaner technology to produce their products.

Green is also a sign of a beginner. If someone is green to a job or activity, they are new to it. So, for example, if I am green at cooking, I haven’t been cooking for very long. So, I’m probably not very good at it. Just ask my family.

Green can also mean other things -- bad things. Historians say long ago the Greeks connected a green color on the face with sickness. They might have thought the color came from an overproduction of bile in the body.

Now, we say that if someone looks “green around the gills,” they look sick or they could be sick at any moment. Gills of a fish are the organs it uses to breathe instead of lungs. In this expression, why we say “gills” is not exactly clear. But maybe it is used as a funny replacement for the word “mouth.”

The Greeks also linked green to jealousy. Today, we use green to describe people who are very jealous or envious. One of the expressions is very simple: We say they are “green with envy.”

Let’s say I really want something that you have -- like a beautiful apartment. You could say that I am green with envy about your apartment.

Envy usually has two parts. You feel unhappy over another person's luck, but you also want to have the same luck for yourself.

It does not feel good to be green with envy. In fact, feeling envious or jealous is unpleasant. But these feelings are natural. We all probably have felt these emotions at some point in our lives.

But some people get so jealous of others that it begins to affect their lives. In that case we can say they are "consumed with envy" or "eaten up by jealousy." We can also say “the green-eyed monster” has a hold of them.

The green-eyed monster is jealousy imagined as a beast that attacks people. It takes over their minds and tries to destroy their lives.

Now, let’s hear two friends use some of these expressions.
So, have you talked to Randy recently?
Yes, I ran into him at a party last weekend and couldn’t believe how different he seemed.

Let me guess…ALL he talked about was the job he didn’t get and the woman who did get it.
Yes! How did you know?

Oh, I’ve been hearing that story for months now. He claims this woman, Jessica, stole his idea and then got the job instead of him.

Yep, that’s the same story he told me...for 40 minutes! The green-eyed monster has really got a hold of him and will not let go. It’s kind of sad.

You’re telling me! I told him that he really needs to get over it. How did you handle it at the party?

I told him I had to use the bathroom and just never came back.
Good move. Until he’s no longer green with envy, it’s probably better to avoid him.