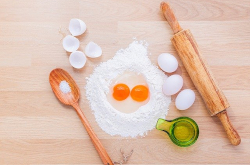 Some people get great joy and satisfaction from doing things by themselves. That is why DIY, or do-it-yourself, projects are so popular.

Such projects became even more popular during the coronavirus health crisis. Another activity became popular -- baking.

I am not talking about opening a box of cake mix, stirring in some water and baking it in the oven. I’m sure that it would still taste good. But it would not be completely homemade. You used a cake mix you bought at the store. In other words, you did not make the cake “from scratch.”

That is the expression we are going to talk about today -- from scratch!

Let’s continue with another baking example. I love to make bread from scratch. I measure out the flour, salt, sugar and yeast. I add some water and then knead the mixture into dough, which is the word for uncooked bread. It is so much fun. And, in my opinion, making it from scratch creates the tastiest bread.

To create something from scratch is to make it without any ready-made ingredients or materials.

Let’s say you want to build a greenhouse for your plants. You could buy one. But it might cost a lot of money. So, you decide to build it from scratch. You build it from the ground up with the most basic materials.

Starting from scratch can also mean starting something over from the beginning. For example, a group of people want to start a reading program for children. But after hours and hours of planning, they have not decided anything.

They thought of many good ideas, but those ideas do not seem to work well together. And the heart of the project has been lost. So, someone suggests, “Hey, why don’t we start from scratch and simplify our ideas.”

Starting from scratch is often the only way to more forward once a project gets really complex.

Or you could continue the same career but in a new way or in a new place.

Here’s another example. A friend of mine wanted to re-start his singing career. He was living in Chicago but did not find success there. So, he moved to Pittsburgh and started his singing career over from scratch. It seems to have worked because he is doing really well in that city.

Some word experts say the expression “from scratch” comes from foot races.

The “scratch” used to mean the line scratched in the ground as the starting line for the race. All the runners would begin with their toes on the scratched line.

The term also is used in cricket and boxing. In fact, it may have been used in those sports first.

Experts often do not agree on word origins. But don’t let that stop you from using “from scratch.” Use the expression the next time you talk about doing something yourself or starting something from the beginning.