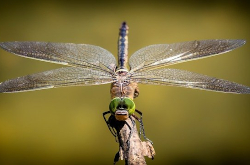 Insects -- or bugs as we generally call them -- are of course necessary in the natural environment. But they are everywhere! They get into our homes. They invade our outdoor parties. So, of course, we have expressions that use insects or bugs.

The first one is really simple. If I say to someone: “You are bugging me!” it means the person is annoying, like a bug! Bugs can be pests, too. So, when someone is really, really annoying, we could say “stop pestering me!”

Ants can also be pests. They are so small that they can get everywhere. In fact, if we sit too long on the ground, they may even get in our pants. If you get ants in your pants, you may move or dance around to get them out.

So, the expression to have ants in your pants means you cannot sit still. You are constantly moving around.

Here is an example. My friend Sylvia is full of energy. I don’t think I have ever seen her sit down for longer than 10 minutes. This makes some people nervous. “Sit down, Sylvia! It’s like you have ants in your pants!” they might say. We often use this expression for children … and Sylvia.

Now, for some of our listeners, the weather is not getting warmer but rather colder. In those places, if you are warm and comfortable usually under many blankets, you can say you are snug as a bug in a rug.

Let’s listen to how we use that expression.
Wow, the wind is really blowing out there.
And the temperature has dropped ten degrees since this morning.

So, do you still want to go out to a movie?
You know, I would love to. But right now, I am snug as a bug in a rug with a cup of tea and a great book.

Doesn’t sound like you’re going anywhere tonight!
Maybe to the kitchen for more tea but NOT outside.

In places where the weather is getting warmer, insects like flies may be coming out to annoy you.

Sometimes their presence means that something bad or unpleasant is nearby. So, we can say a fly in the ointment to point to something bad that ruins something else. Ointment is a type of medicine that you put on your skin. If a fly lands in it, you really can’t use it as medicine.

Let’s hear that expression used in a couple of sentences.

Her surprise party for her husband’s birthday was nearly ready. The food was ordered. The cake was made. And all his friends were hiding in their house. Then came the fly in the ointment. His flight was canceled, meaning he would miss his party.

Having a wedding onboard a boat, sailing along the blue sea seemed like a great idea. The weather was beautiful, and everyone was happy. The only fly in the ointment was the boat’s loud engine. Nobody could hear a thing -- not even “I do!”

Now, flies are everywhere. And we really do not think twice about killing them. So, if someone is very gentle with no violent feelings at all, we could say that person would not harm a fly.

Now, let’s talk about another flying insect. This one is not annoying but rather very important. Bees are always working and make wonderful honey. So, you may have heard the expression to be busy as a bee.

But did you know that if you have a bee in your bonnet, you are angry about something? Something is annoying you. Maybe you haven’t heard it. The expression is a bit old.

After all, a bonnet is a type of hat worn by women as early as Medieval times. But sometimes we use this expression when we want to make fun of someone who is acting angry but for no good reason.