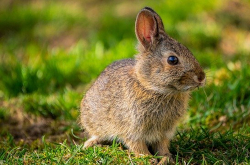 On today's program, we are going to talk about rabbits.

Rabbits, like many other animals, dig holes and complex underground passages, like tunnels, to build their homes. So, when rabbits want to go home, they must go down the rabbit hole. And that may lead to other holes, tunnels, and paths, or even other rabbit homes.

In English, we use the expression down the rabbit hole when we get so caught up in the search for something -- like an answer to a problem -- that we end up somewhere totally different.

The Internet is an easy way to get lost down the rabbit hole.

My search for “down the rabbit hole” returned the video game “Down the Rabbit Hole.” The animation was so beautiful! I had to find out more about who drew the images for the game.

A few more clicks led me to a website about learning how to draw children’s books. Let’s talk about children’s books. Do you know there is a famous book festival in the Italian city of Bologna? After an hour and many more clicks, I found myself watching a YouTube video on how to make the meat sauce Bolognese.

In other words, I had fallen down a rabbit hole and wasted an hour. But, at least, I got an idea for dinner!

Here are some notes on usage.

We often describe what kind of rabbit hole we get lost in. For example, if you get completely overtaken by your research on climate change, you could say you “went down an environmental rabbit hole.”

There are many verbs that you can use along with “rabbit hole.” You can get lost, fall down or get stuck in a rabbit hole.

But where did this come from? Well, the expression comes from the book Alice’s Adventures in Wonderland written by Lewis Carroll in 1865. Alice, the girl in the story, begins her adventure by falling and falling and falling down a very long rabbit hole.

She falls slowly and sees things on the way down -- strange things. And when she arrives at the bottom things only get stranger.

And that is another way we use this expression. It can describe a completely strange situation or an all-consuming situation. By all-consuming, I mean a situation where you lose touch with reality. You lose yourself a bit.

For example, once on a trip to Coney Island, New York, I got lost and ended up in a very strange place. There was a play going on and everyone was dressed up. A band was playing strange music and the lights were all different colors. I had definitely fallen into a rabbit hole! But this time it was Anna’s Adventures in Wonderland!