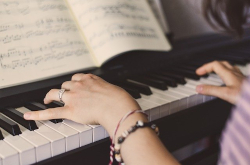 Today, our expression comes from music. A chord is three or more musical notes sounded at the same time. The word “strike” means to hit. But when we play a note on a musical instrument, we can also say we struck a note.

So, our expression for today is to strike a chord.

In its most general definition, to strike a chord means something relates to you somehow. It resonates with you. If something strikes a chord with you, it is familiar to you in some way, for better or for worse.

Something can strike a positive chord. It is familiar to you in a good way. It creates good feelings or thoughts. For example, a love song struck a deep chord with James. It is the song he sang to his wife at their wedding. Or maybe the song was playing on the radio when she left him. In that case, the song would strike a negative chord with James.

As you can see from those examples, you can add other words to describe what type of chord is being struck -- a deep chord, a negative chord. Here are some other examples.

You might hear people say something “struck a familiar chord.” But to me, this sounds a bit unnecessary. If something strikes a chord, it means it is familiar in some way. So, we don’t need to add the word “familiar” to the expression. But I have heard it used that way before. Maybe it means something is really familiar.

Sometimes we use to strike a chord this way: If something creates strong feelings or thoughts, it strikes a chord. And that “something” could be unfamiliar to the person.

Here is another situation where we use this expression: If something strikes a chord with you, you approve of it. You agree with it. For example, during the election the politician’s position on the economy and jobs must have struck a chord with voters because she won easily.

Let’s talk for a minute about sentence structure.

If you look back at our examples, most if not all of them use the word “with" -- with James, with students, with voters. But you can use this expression without the word “with.” In this way, “strike a chord” means it caused a strong emotional reaction to something. For example, that movie must have really struck a chord. Everyone came out of the theater crying.

Hopefully learning English continues to strike a chord with all of you … a positive one!