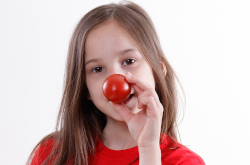 Our bodies give us so many expressions. And today we talk about the facial feature that sticks out the most…your nose!

Well, unless you are wearing a mask, which covers the mouth and nose. But most of the time our noses are noticeable. You can see them clearly. And that fact gives us this expression: “as plain as the nose on your face.”

This describes something that is very clear, easy to see or understand. It is obvious.

Here is one way to use it. My friend Marina liked my other friend, Christopher, a lot. She never told me, but I could tell. Every time he entered the room she acted differently. She talked faster and fixed her hair a lot. And she laughed at every joke he made, even the ones that were not funny. So, to me she obviously liked him.

When I asked her about it, she said, “How did you know?” “Marina," I said, "it’s as plain as the nose on your face. Which means…he probably knows too!” Her face turned deep red from embarrassment.

Imagine we all have to wear masks all the time for years and years. If that happens, this expression might change. But for now we still use it.

Here is our next expression. It’s an easy one: on the nose. This expression has two very common meanings.

If something is “on the nose,” it is exactly right. It is accurate. For example, his guess about the new company succeeding was right on the nose. After only a year, it is making a lot of money.

“On the nose” also means something happens at the exact set time. For example, Marjorie’s work day starts at 10am. And she arrives to the office every day at 10am on the nose.

But being “on the nose” and on time doesn’t mean you have to do it every day. It just means you agreed to be somewhere at a certain time and you are there.

Some word experts say this usage of “on the nose” comes from radio. When recording a radio show, the voice performers are in a recording room. They are separated from the producers and sound experts by glass. Oftentimes, the recording could not be interrupted.

So, if a show was running on time, the producer would put a finger on his or her nose to let the performers know.

Here is our last expression. One thing noses do is smell things. The nose can help us find food. Sometimes it can help us detect danger, like smelling smoke. This is a valuable ability.

So, if you have a special ability for something, we can say you “have a nose” for it. For example, a good detective has a nose for solving crimes. They can sniff out hidden clues. To sniff is to breathe in quickly, like this: (sniff sniff).

If you have a nose for news, you are good at finding news stories. It’s like you can sniff out an interesting story. Many of our listeners definitely have a nose for learning English.