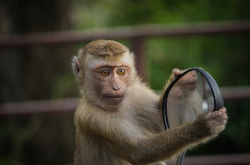 On today's program we talk about animal expressions!

English has many animal expressions -- too many to name. Also, in English, as in many other languages, some animals have come to have certain reputations. That is to say, they are known for certain behaviors.

For example, dogs are loyal. We often call them “man’s best friend.” Cats are independent and mysterious. In old stories, snakes and foxes are not to be trusted. Turtles do things slowly. While rabbits are full of energy.

Then there are monkeys. Monkeys have a reputation for being silly and causing trouble. Good words for that are naughty and mischievous.

Now, a barrel is a large wooden container. I’m not sure how to get monkeys into a barrel. But I'm guessing it would be fun.

For example, last weekend I went to a party and it was really fun. At the party, my friend told me a funny story, and I laughed out loud.

Some word historians think that the expression “barrel of monkeys” was first recorded in 1895. It describes the playful behavior of these primates. We use it to describe any type of fun activity or person.

To call something a barrel of monkeys is definitely informal. You could also call a really fun event a riot. Where I grew up in West Virginia, people might call something really fun a hoot. That is also informal and a bit rural.

The first is to simply “monkey around.” To monkey around means to goof around or cause harmless trouble. But it could lead to more serious trouble. So, a parent may warn a child, “If you monkey around someone could get hurt. So, stop it!”

If I make a funny joke at a work meeting, someone could tell me to stop “monkeying around and get serious.”

Our last expression is “monkey business.” Monkey business usually means dishonest activities. For example, most people expect a little monkey business in politics. It just seems to come with the territory, as we like to say.