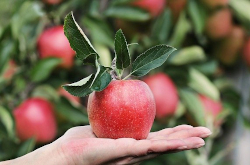 Today we talk about expressions that remind us to be healthy and have a healthy lifestyle.

Benjamin Franklin often gets credit for some very famous healthy lifestyle sayings. Here is one about planning your day: “The early bird gets the worm.”

That is why he also reportedly said, “Early to bed and early to rise makes a man healthy, wealthy, and wise.”

The meaning of this expression is pretty clear. It means that going to bed and waking up early may lead to success and better health.

While Benjamin Franklin often gets credit for saying this, other word experts say this expression was said slightly differently in English as early as the mid-1400s and, in Latin, even earlier.

Personally, I like to go to sleep early and wake up early. But what if you’re a night owl and do your best work at night? Waking up really early would not be a good idea.

We all need good sleep to be healthy. We also need to eat well. We have some expressions that remind us to eat healthy. Here is one: “An apple a day keeps the doctor away.”

Some word historians say this saying first appeared in publication in the mid-to-late 1800s. It sounds like a very specific saying -- if you eat more apples, you will be healthier. And if you are eating an apple, someone might say to you, “I see you’re trying to keep the doctor away!”

But sometimes we use this expression as a simple reminder to eat healthy -- and not just apples.

After all, “You are what you eat.” This saying also reminds us to eat healthy. And sometimes it is used to criticize someone’s poor food choice. Some young people may look like a picture of health. But if you eat too much junk food, or smoke, or drink a lot of alcohol when you’re young -- you might get sick easier.

But we also use this expression for other things that go through a difficult time but get better. For example, let’s say a country’s economy is doing well after a period of not doing well. Economists could give that country’s economy a clean bill of health.

A: Wow! You look great! What did you do? New haircut? Lose a couple of pounds?
B: I finally changed my job. Working nights at the news desk was killing me!
A: Yeah, I don’t know how you worked that night shift for so long.

B: It was difficult. My sleep suffered. And I got no exercise. And I was eating poorly. You know how they say, you are what you eat?
A: Yeah…?

B: Thanks. But I’m better now. As soon as I changed jobs ... I felt better. My doctor just gave me a clean bill of health.

A: You look like the picture of health. Here … have an apple. I have two.
B: Thanks!