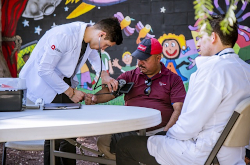 Whenever there is a health crisis, two groups of people can bring help -- doctors and nurses.

A nurse is a person skilled or trained in caring for sick or injured people. We also use the word “nurse” as a verb. You can nurse a person or animal back to health. And you can nurse a patient, helping that person heal or get better.

But you can also nurse a symptom, something unhealthy like a headache after a late-night party. You can nurse other bad things too, like a grudge. A grudge is a strong feeling of anger toward someone that lasts for a long time. If you nurse a grudge, you keep the anger alive. You make sure it doesn’t lessen over time.

You can use the verb “nurse” in other ways. For example, you can “nurse a drink.” That doesn’t mean you are trying to heal it, but rather you drink it very slowly, to make it last longer. For example, if I go to a costly restaurant and buy a $15 drink, I might nurse it to make it last the whole meal.

The word “doctor” is also used as a verb. The Merriam-Webster online dictionary says that one meaning of the verb “doctor” is to give medical treatment. For example, she doctored her sick friend. That makes sense. But personally, I have never heard the term used that way. In my opinion, it is more common to nurse someone back to health.

Sometimes people say “doctor” to mean “fix.” For example, he has doctored that clock several times. But again, this usage is rare.

A more common usage of the verb “to doctor” is to change something in an honest or dishonest way. For example, the school board official was accused of doctoring her study results. She was caught changing the results to fit her policy needs.

When we change something, either in an honest or dishonest way, we sometimes add the word “up” to “doctor.”

For example, the writer doctored up the script to better fit the actor. Here is a dishonest example: The legal team was accused of doctoring up photographs of evidence.

In a recent Words and Their Stories, we talked about another expression that means the same thing. If something “hits the spot,” it is just what you need at that time.

Our last expression is this: Doctors make the worst patients.

This means it is difficult to give people advice about something which they do for a living. This is because they might feel they know better than the person giving the advice.

For example, Mary tried to persuade her boss at the bank to seek help for his growing debt. But he got angry. He said he knew best how to deal with his money. She just shook her head and said to herself, “It’s true. Doctors make the worst patients.”

Now, let’s hear two neighbors use some of these nurse and doctor expressions.
A: Hi there! I see you’re cleaning up your garden. It was so beautiful this summer.
B: Thanks! I was pretty proud of it. Are you good with plants?

A: I’m only good at killing them, unfortunately. Like this one. It’s pretty brown.
B: Oh dear.

A: Do you think you can nurse it back to health?
B: Um…I’m sorry. But this plant is dead. You need to water your plants.

A: Good advice. You should tell Celia across the street the same thing. She owns a plant store but still the plants at her house look awful!

B: I tried to give her some advice once. She did NOT like that one bit. You know how it goes: Doctors make the worst patients. But as for your plant…it’s dead. There’s no nursing a plant back from the dead.

A: That’s too bad. I wanted to use it for some photos for my website.
B: Maybe you could add a plant.
A: What do you mean?

B: You know, doctor the photo on your computer and add a plant.
A: Isn’t that dishonest?

B: The photo is just for your website. It’s not like your doctoring official evidence in a criminal case. Now THAT would be dishonest.