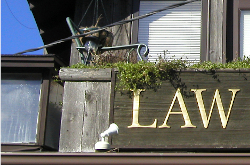 
Murphy’s Law is an American expression whose meaning spread around the world. Murphy’s Law says: "Everything that can possibly go wrong will go wrong." Like many other popular sayings, it is difficult to find one explanation for it.

Those trying to explain Murphy’s Law agree that it began in the United States Air Force. The Air Force says the expression was named for officer Edward Murphy. He was an engineer working on a project in space flight research in nineteen forty-nine.

One story says Captain Murphy was commenting about the failure of some equipment he was using in an experiment. He reportedly criticized the worker responsible by saying: “If there is a way to do it wrong, he will find it." Another official heard this and called it Murphy’s Law.

Another story is found in a book called “A History of Murphy’s Law” by Nick Spark. It says members of the research team working with Captain Murphy created a similar phrase: “If it can happen, it will happen”. They called this Murphy’s Law. But Mister Spark later said there is no way to really know who invented the expression.

Still, many stories say the first use of the term Murphy’s Law was at a press conference several weeks later. John Paul Stapp was an Air Force captain at the time. He spoke to reporters about the tests completed by Captain Murphy and his team. Doctor Stapp said no one was injured during the tests because the Air Force considered "Murphy’s Law" before carrying out their experiments.

He said this meant that they considered everything that could go wrong before a test and planned how to prevent those mistakes from happening.

Today, you can find examples of Murphy's Law in everyday life. You might say that if you drop a slice of buttered bread on the floor, it will always land with the buttered side down. Or, the day you forget to bring your umbrella, it is sure to rain.