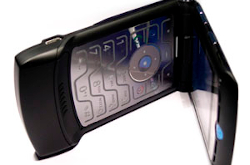 
Cellular phones are extremely popular in the United States and around the world, especially among young people. Now, teenagers are using a cell phone ringtone that many adults cannot hear.

The sound that the cell phone releases is a very high frequency, or pitch. Many older people are not able to hear the ringtone. Teenagers are using it to communicate during school classes. Students are supposed to have their cell phones turned off during classes. But some students use the ringtone so they can send text messages to each other during class without their teachers knowing.

A British security company first created the sound and called it the Mosquito. The Mosquito device is a small black box that sends out sounds at a very high frequency. The device was used to solve a problem for British storeowners. Many teenagers gathered in stores without buying anything. Storeowners used the Mosquito sound to make the teenagers leave the store.

Many people from around the world have written about the ringtone on Web sites. Some people over forty years old said they could hear the ringtone, too. And some young people found the ringtone to be painful to hear. They said it hurt their ears and gave them headaches. Here is the ring tone. Can you hear it? Here it is again!