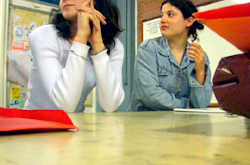 This week, we report comments from foreign students in the United States who have experienced the process we have been describing.

We talked to four students attending the University of Wisconsin in Madison. Two are undergraduates -- Ometere Omoluabi from Nigeria and Chilwin Tanamal from Indonesia. The others are graduate students -- Rogerio Mazali from Brazil and a young woman from China who does not want her name broadcast.

All four agreed that it is important to know what you want to study before you begin applying. Chilwin says you should start the application process early and do a lot of research about different colleges. Rogerio feels that the most important thing is to find a school that best fits your personality and interests. Most of the students say they chose the University of Wisconsin because it offered the best education in their subject. Also, they had met people in their home countries who had attended the school.

We asked the students about differences between their lives at home and in the United States. Most commented on the weather. They said the extremely cold winters in Madison were difficult because they were used to a much warmer climate.

The students also talked about the large size of the University of Wisconsin. Ometere says to decide early if you will be happy at a large or small school. She also says to be sure to attend to details on your applications. Relations between professors and students was another change for the students. Chilwin says students in the United States must make more of an effort to talk with teachers than in Indonesia.

Rogerio said college life moves much faster in the United States than in Brazil. The young woman from China discussed the lack of interaction among people of different cultures. She finds it sad that many foreign students stay together in their own social groups. However, Ometere says she has met people from many cultures and that experience is the reason to come to the United States to study.

All the students say they are enjoying their time in the United States and hope others will have good experiences.