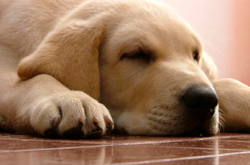 Studies show that dogs and human beings have similar brain activity when they sleep. Researchers use a test called an electroencephalogram to study such activity.

When dogs first go to sleep, they enter a period of light sleep. This is when they can be easily awakened. In light sleep, dogs lie still and their breathing is normal.

When dogs enter deep sleep, they have difficulty waking up. Brain wave activity greatly increases. Dogs begin unusual breathing. Rapid eye movement also begins. During rapid eye movement, the eyes are moving quickly, forward and backward. Then dogs may begin to make sounds. Their bodies may make uncontrolled movements. Their legs move as if they are running. It may seem as if the dog is having a bad dream. It is best not to wake a sleeping dog. Like people, dogs need continuous sleep for healthy mental activity.

Researchers say dogs have several dreams each night. The amount of time spent sleeping is different with each animal. Most dogs sleep thirteen to fourteen hours a day.